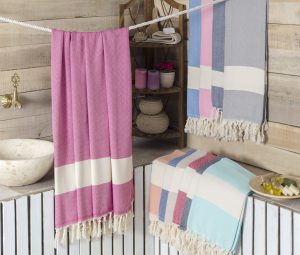 Peshtamal, also known as the hammam towel, has a very significant place in our history thanks to its various usage areas and the way it represents Turkish culture at its simplest form. Peshtamal which was mostly used as hammam or bath towel in the past, also symbolized countless things in different fields of the daily life. Hammam towel is replacing the towels we know today in every part of life by regaining its significance not only in Turkey but also in the World Market.

What makes peshtamal a perfect alternative for terry towels is its lightness, water absorption, fast drying and the fact that it doesn’t take up too much space. In addition to that, with its different patterns and countless color spectrum it is not only stylish but it also gives you the opportunity to create the design you desire.

Peshtamal which we mostly come across with in the beaches lately, also appears in spas, pools and gyms. With the comfort it provides for both carrying and storing, it is becoming an irreplaceable piece for travel. Moreover, thanks to the way it keeps you cool, its elegance and practicality; it is climbing the stairs of success in fashion industry. Dresses and shirts made of peshtamal are essential pieces of summer for women now.

This increasing demand for Hammam Towels is expending the usage areas every day. Peshtamal, which is an irreplaceable part of beaches, spas, pools and gyms; is taking its place in home textile as bed sheets, pillowcase, table covers and bathrobes. Thanks to the conveniences it brings along,  peshtamal is becoming the number one alternative not only for personal usage but also for the big spas and hotels.

Turkish towel which is gaining popularity in both Turkish and World Market, is renewing and improving everyday by multiplying its potantial and quality.